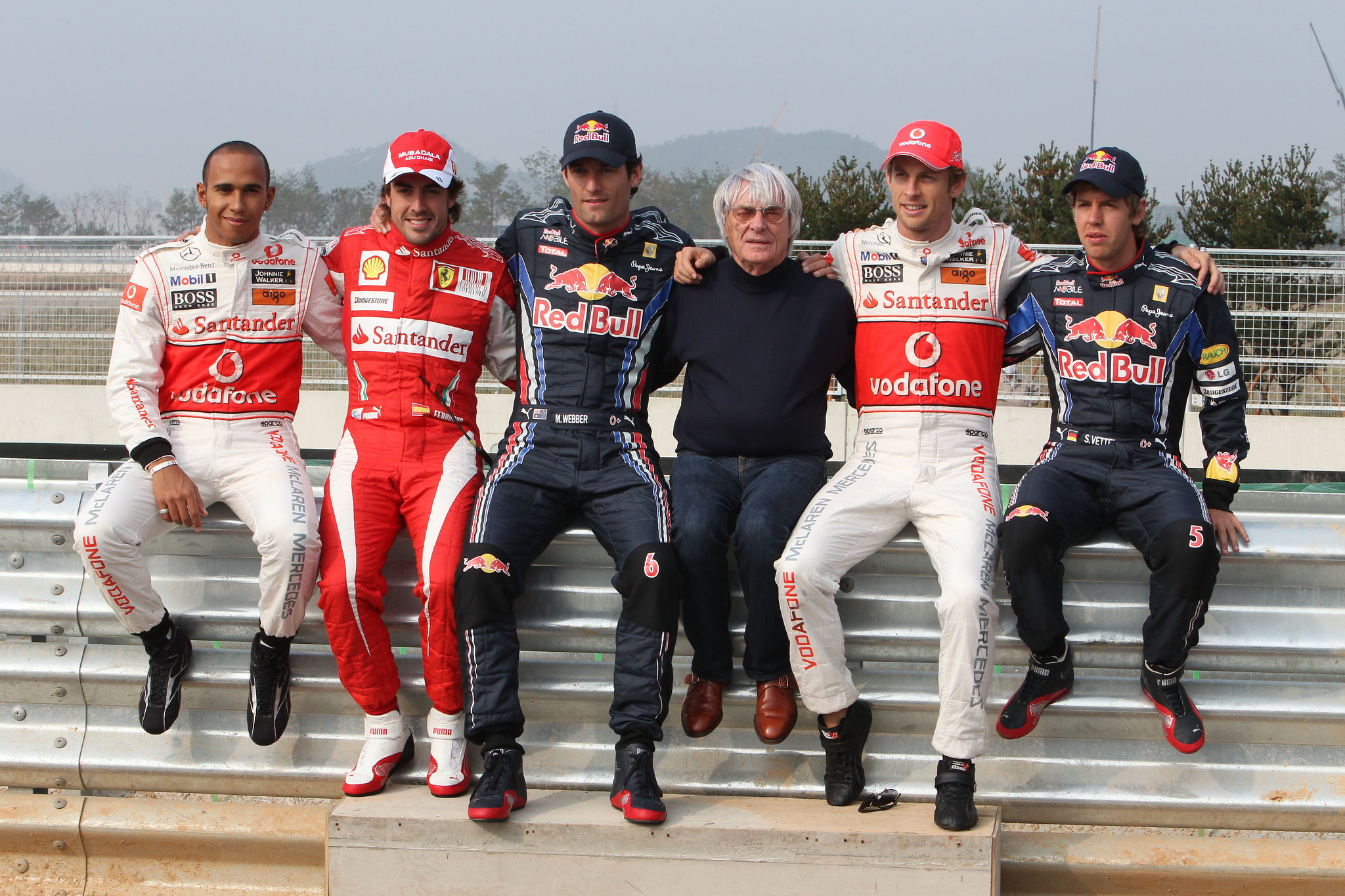 Are today’s F1 drivers bland versions of swaggering champions past? Is the champagne now restricted to the podium celebration? Has their thirst for winning overtaken their appetite for late-night loucheness? Our F1 expert reveals all.

Formula One drivers were once the undisputed playboys of the sporting world. But today’s drivers are a much tamer bunch – or are they? As a paddock insider for the past 15 years, allow me to dish the dirt on the men who live at 200 mph.

In the old days, sex was safe and racing was dangerous. Because a driver’s life expectancy was so short, they wanted to pack as much fun in as they could. Consequences were never considered. The biggest tearaway was James Hunt who, legend has it, bedded 33 British Airways stewardesses at the Tokyo Hilton on the eve of winning the 1976 world championship. Then there’s Alain Prost, who blames losing the 1984 title to Niki Lauda because Prost was up all night before a key race ‘entertaining’ Princess Stephanie of Monaco.

Back then, even the sponsors were macho and dangerous. Mostly cigarette companies, they got into bed with motor racing because of the sex-appeal, danger and testosterone. But as the new millennium dawned, tobacco was forced out and banks, energy drinks and telecoms companies took their place. In short, it all became terribly clean cut.

I recall attending a job interview in 2003 with McLaren’s PR and marketing chiefs. It came at around the same time a woman had sold her story to a tabloid about sharing a bubble bath with then McLaren driver David Coulthard. This, I told them, was the perfect image to promote their sponsors and that Mr Coulthard should receive some kind of bonus for his efforts. However, the team had been advised by their clients to try to contain all of DC’s playboy exploits. Whatever happened to “sex sells”, I wondered? Suffice to say, I didn’t get the job.

Rise of the robots

The ‘90s ushered in a new era of soulless, unsmiling corporate drivers that all but marked the end of the F1 playboy era. There’s a telling old Fry & Laurie sketch in which Stephen Fry interviews a taciturn young racer, loosely based on Michael Schumacher. Growing increasingly frustrated with the driver’s lack of enthusiasm, the reporter eventually screams: “You do a job that half of mankind would kill to be able to do, and you can have sex with the other half as often as you like – I just need to know if this makes you happy!”

The one time that Schumacher did let his hair down, after winning his fifth title in Japan, he stole a forklift truck and threw a fridge through a window. The Sun headline read: ‘Schu Trouble Macher’. Rather than tarnish his image it made him easier to relate to, more human.

But team PRs now insulate the media so that stories such as these – controversial and of a personal nature – don’t meet a wider audience. Sponsors are attracted to the youth, glitz and inherent risks of F1, yet are uncomfortable when it starts getting a bit too real.

Most drivers are perfectly articulate when they can be bothered. But you sense they’re reading from a script and stage-managed by their uniformed cronies.

Seldom do we see them unguarded. And never do you hear about champagne-soaked ménage-a-trois aboard trackside yachts in Monte Carlo, which is a shame because they do happen.

Jenson Button came in for a lot of flak when he arrived in F1 in 2000. The 20-year-old purchased a yellow Ferrari 355, moved to Monaco, bought a yacht and found a new girlfriend. Too many distractions, warned the critics. Team principals didn’t take him seriously, thinking he lacked commitment. But when Button was finally given a winning car to drive, he was able to prove them wrong. On the eve of the 2009 Australian Grand Prix – his championship-winning season – in a display of his work ethic, Button went on a self-imposed sex ban with lingerie-model girlfriend Jessica Michibata ahead of the race. Half an hour after the chequered flag they made up for lost time in the Brawn GP hospitality unit. Interviews were postponed.

The Button-bashing served as a warning to many of the youngsters coming through the ranks: Don’t be too flash. And if you must have a G450 and an island, try to keep it out of the papers.

Making up for lost time

Photo by Michael Elleray on Flirck CC BY 2.0

Most drivers these days start racing before they’ve hit double digits. They miss out on a normal childhood. Lewis Hamilton is a prime example. He was signed to McLaren’s young driver programme at the tender age of 12 and groomed to be a racing superstar from that moment on, with the media taking a strong interest. It was the opportunity of a lifetime, no question, but it also restricted his personal development. Having switched from McLaren to Mercedes in 2013 he’s been let off the leash and has spent the last seven years (and four world titles) discovering who he is. He is embracing his background, his future, and his off-track interests. He is out there living the life of a multimillionaire celebrity and he’s not afraid to show it. In the process he’s building a brand, reaching an audience that would never normally tune into motor racing but might to see him, and he’s annoying jaded F1 purists who think racing drivers should stick to the Grand Prix Ball, rather than the Met Ball.

His championship foe, Sebastian Vettel, is an altogether different character and it’s this, as much as their natural speed, that makes theirs a rivalry for the ages. Vettel arrived in F1 aged 18, and I immediately warmed to his easy-going charm and sense of humour, which he’d picked up in England racing in the lower formulas. But he still looked like a choirboy and was just as innocent. He turned up at the Pacha nightclub in Sao Paulo in 2007, his debut year, wearing a black turtleneck and looking like an adolescent James Bond. He had his eye on a girl there but was so nervous about approaching her that his trainer and I had to physically drag him over. Not long afterwards, having won his first grand prix, a reporter asked him if it was the best day of his life. He replied: “You obviously weren’t there when I lost my virginity”. I reckon I probably was.

As F1 has become more technically complicated and commercially proactive, the demands in and out of the car have become greater. This leads to early nights. And with rookie drivers getting younger each year, some might lack experience in areas beyond race-craft. But as the job description dictates, they’re fast learners. F1 drivers still live at 200 mph off-track as well as on, it’s just you rarely get to read about it.

Still crazy after all these years

Still crazy after all these years

It’s been 21 years since the iconic Gumball 3000 rally first revved up its engines. We catch up with its fast-living founder Maximillion Cooper to delve into some of the more eye-raising stories from years gone by.

You’ve got to be the very best to make it to the Olympic Games podium. But, let’s face it, some sports are tougher than others. And others might simply require a modest amount of training, as opposed to being born with a strangely sports-specific body or natural aptitude. Sailing, for example, we’re looking at you. Your new life in elite sports starts here.