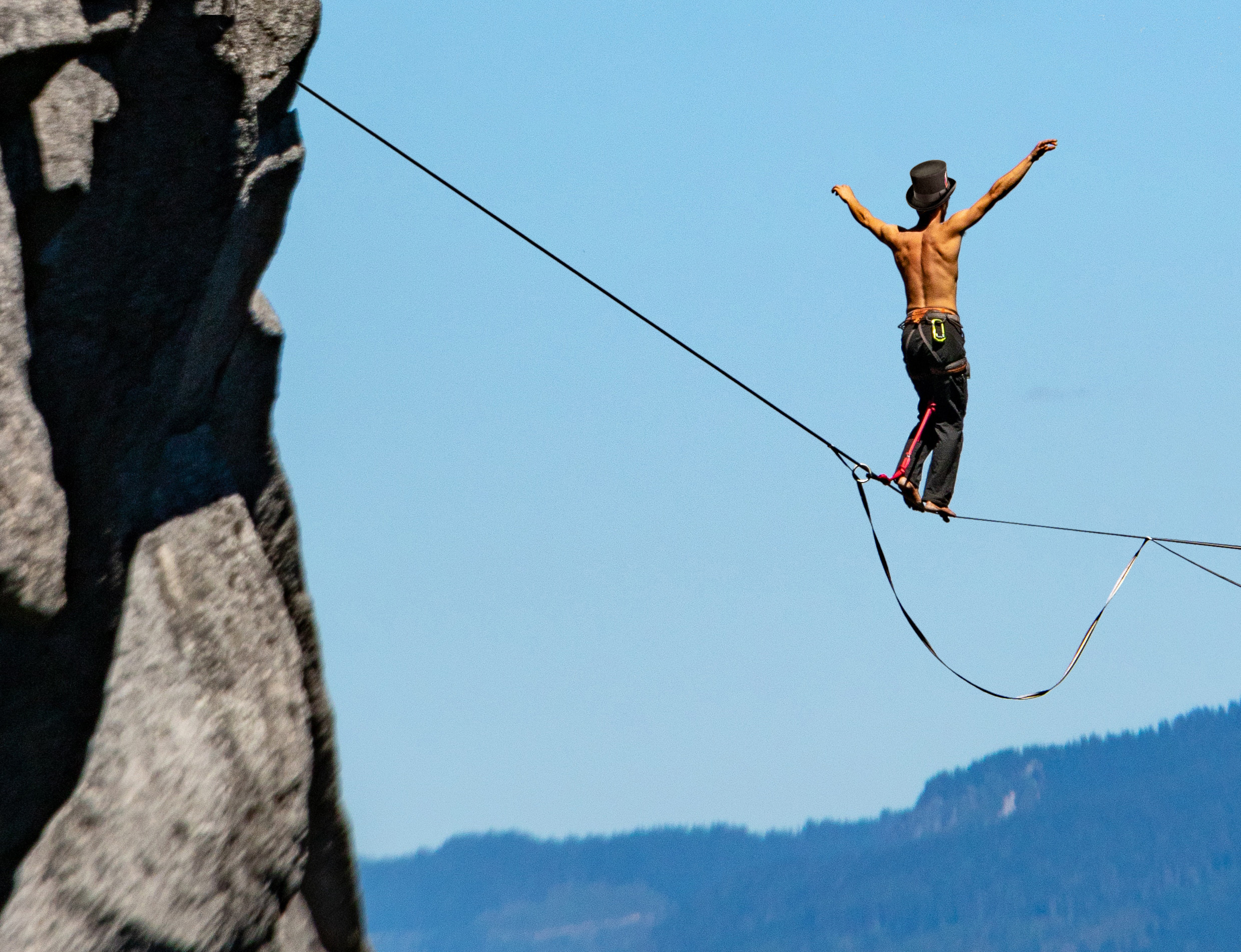 At the crack of dawn on April Fool’s Day, around 40 years ago, a well-dressed man, with a scarf over his face and clutching a bottle of champagne, swung his legs over Bristol’s Clifton Suspension Bridge and dived head-first towards the River Avon, 80 metres below. He had just invented bungee jumping.

This man was David Kirke. One might say he was mad, as were the three other ex-public schoolboys who jumped down after him, their home-made cords connected to the bridge by untested elastic. Yet by inventing the Dangerous Sports Club, they became legendary figures at Oxford University and a thorn in the side of the local constabulary.

Things escalated quickly from there: over 80 white-knuckle capers in more than 40 countries that broke limbs as well as laws.

The abiding principal on all these outings, said Kirke quoted in Vanity Fair, was “one-third recklessness of innocence, tempered with two-thirds recklessness of contempt.”

Membership, which included Monty Python’s Graham Chapman, swelled throughout the 1980s as the gang attempted BASE jumping in top hats and tailcoats, hang-gliding off active volcanoes, taking the Cresta Run in shopping trollies, and skateboarding during Pamplona’s running of the bulls.

Photographer Dafydd Jones recorded their jaw-dropping activities. “I first met David Kirke at a Piers Gaveston party at Oxford,” he writes, and then went to see the gang in action at the Gloucestershire home of the Dutch ambassador. “David buzzed overhead in a microlight. A young Nigella Lawson played croquet from a sedan chair supported by four members of the club.”

Photographer Dafydd Jones recorded their jaw-dropping activities. “I first met David Kirke at a Piers Gaveston party at Oxford,” he writes, and then went to see the gang in action at the Gloucestershire home of the Dutch ambassador. “David buzzed overhead in a microlight. A young Nigella Lawson played croquet from a sedan chair supported by four members of the club.”

One of the highlights of the ‘season of danger’ was their regular assault on the Alps. Fellini-inspired surrealist gatherings included bicycles and sculptures on skis, on which these blue-blooded renegades would ride with parachutes to help with the really steep bits. One member rode down the mountain at St Moritz on a grand piano, another group on a Louis XIV dining set, and sculptures on skis. The shenanigans reached their limit when the club arrived in a red double-decker bus and got it halfway up the slope before the pesky Swiss authorities shut them down.

Up until then, the Swiss had been marketing it as tourist attraction: Come and see the crazy English.

Alan Weston, an engineering grad who later became a rocket scientist with the US Air Force, flew around the Houses of Parliament in a microlight, wearing a gorilla outfit and playing a saxophone whilst being chased by a police helicopter. David Kirke was sponsored by Foster’s lager to cross the English Channel in a kangaroo-shaped balloon, suspended beneath helium balloons, leading to his prosecution for flying without a pilot’s licence. They shared an insouciant disregard for such bourgeois concerns as health and safety.

The Dangerous sports club part 1 of 2

The Dangerous sports club part 1 of 2

The dangerous sports club film, enjoy! (I do not own full rights to this footage was told to put it up for people to see and appreciate)

Or, indeed, having jobs. It proved an expensive lifestyle to maintain, and efforts to fill the club’s coffers were half-hearted. “There was an early attempt to capitalise on the club’s fame by introducing Dangerous Sports Club wine,” writes photographer Jones. “Much effort went into selecting a decent vintage and designing the label. But no-one knew how to market the wine. I think we were drinking it at a party David gave in Fulham; someone there, after drinking, proceeded to eat his wine glass. I could hear the crunching sound.”

Kirke, having never held down anything as mundane as employment, went to prison in 1990 for four-and-a-half-months for fraud.

“I didn’t know it was an offence to bounce cheques,” he told the Telegraph. “I was too proud to borrow money, and I wasn’t aware that what I had done was a crime.”

Despite this, Kirke has led a relatively charmed life, given he’s still alive at 74 and broken just a few bones. In 1988, he seriously injured his back after being shot off an Irish cliff into the sea by a device used to launch drones off aircraft carriers. “I’d do it all again, though,” he says. “Life is very long without those brief moments.”

Nevertheless, disaster was the destiny of a club the DSC inspired. In 2002, the Oxford Stunt Factory set up a giant medieval catapult that resulted in the death of a 19-year-old Bulgarian biochemistry student. The trajectory was that of being flung over a house, and Dino Yankov missed the net and made a dull, heavy thud. The organisers, who were both DSC members, were acquitted of manslaughter.

It was a tragic coda to a uniquely British brand of eccentric competition – at its core a distaste for anything in sport that smacks of professionalism. Kirke tried the trebuchet catapult himself on his 55th birthday and described it as “extraordinary. I’d do it again, without a doubt.”

For now, the club ties have been hung: They depict a silver wheel chair with a blood-red seat, set on funereal black. “The true story of the DSC cannot be told until after I am dead,” Kirke told the Telegraph. “Right now, it would be too dangerous.”

“We were gentleman adventurers,” he adds, “we never, ever harmed anybody apart from ourselves.”

From Uno to Monopoly to Scrabble to Blackjack and more, here are some of the world’s most popular games –and the most common mistakes made when playing them.