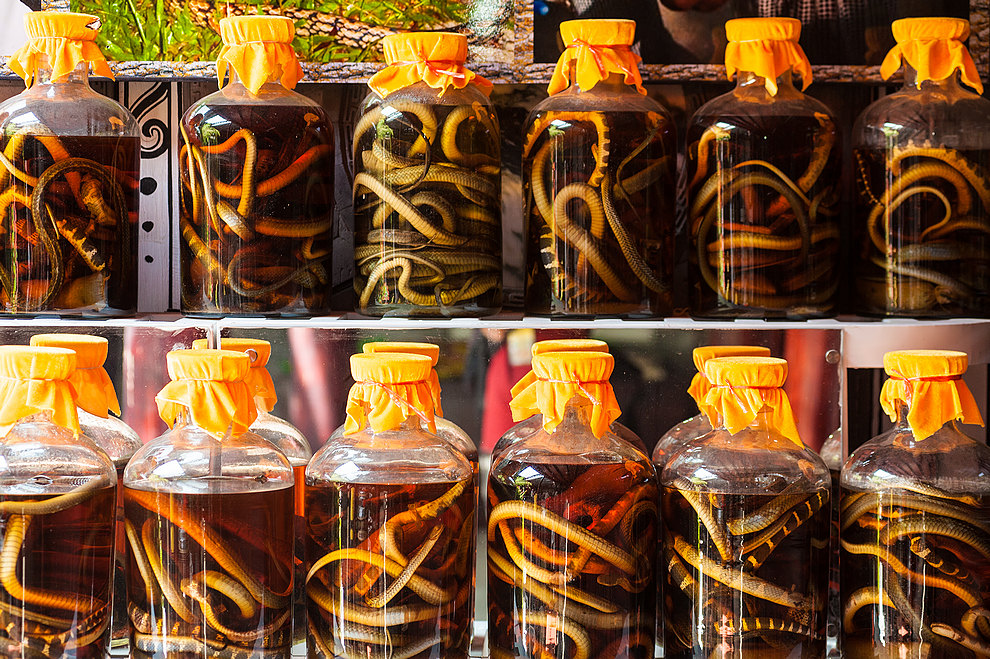 The craft beer revolution of recent years may have introduced traditional beer drinkers to a new world of hoppy goodness, but this is just the beginning of a journey into alcoholic experimentation. There’s a whole world of weirdness out there to discover – some delightful, some gag-inducing. Your intoxicating odyssey starts here.

Although it sounds like something that might be served at a Slytherin Christmas dinner, snake wine is relatively common in Vietnam and parts of Thailand. To make it, take an entire snake – sometimes while still alive — and put it inside a jar of rice wine or another form of kind of grain alcohol. Let it steep for several months, perhaps adding some spices or ginseng (to give it its much-disputed ‘invigorating’ properties), then serve – usually to thrill-seeking tourists. Take care, though, as in rare cases snakes can hibernate in the bottle, and still be alive when it’s opened – as this unfortunate woman discovered.

You like bacon. You like vodka. So why on earth wouldn’t you like bacon vodka? It could be, of course, that you sensibly think that just because two things are delicious, they won’t naturally come together as one doubly delicious thing. However, the success of this drink – made by Black Rock Spirits – suggests that it has fans squealing with delight worldwide. It makes a lovely, smoky bloody mary, we’re told, and also a rather more questionable concoction called a Luau, a mixture of vodka, pineapple juice and a dash of butterscotch.

So let’s imagine your friend has said ‘surprise me’ when asked what he wants to drink during your big night out at Swingers. There are a host of fabulous cocktail options available and supremely knowledgeable bar staff ready to rock your world, alcoholically speaking. But what is the weirdest (yet still utterly delicious) drink that they might choose for you. Well, say hello to the Copper Dog.

Created by head bartender Leo, it’s based on two classic cocktails – the Blood and Sand that combines scotch whisky and orange juice and the Sazerac which uses absinthe as a final note. Its unusual taste profile sees the character of the Copper Dog whisky balanced with the fruitiness of apple juice, and sweetness coming through from the orgeat syrup and cherry syrup. A final spritz of absinthe adds a note of anise (aniseed). Fun fact: Leo got the flavour right first time, with the ingredient amounts you see below being the same ones he used on his first attempt.

Unlike regular wine, it doesn’t take years of training and a deep knowledge of viniculture to create this gag-inducing drink. Simply find a dead seagull, put it in a bottle with some water and leave to ferment in the sun. Invented by the Inuits, one writer describes the taste as: “If you opened up a Toyota’s carburettor and drank the leftover fluid from inside, that would be pretty close.” And yes, a few sips of this and you’ll be flying.

When you want a drink with some proper poke, look no further than the Sourtoe Cocktail – served at Downtown Hotel's Sourdough Saloon in Dawson City, Canada – which contains a real human toe.

Its origins go back to the 1920s, when a bootlegger placed one of his frostbitten toes in moonshine as a grisly keepsake. In 1973, the preserved toe was discovered and the Sourtoe Cocktail Club was born. Since then thousands of people have visited the bar to try the drink, whose recipe is simple: "1 ounce (minimum) of alcohol, 1 dehydrated toe, garnish with courage."

And while you must let the toe touch your lips, there’s a hefty fine if you swallow it. Incredibly, this has happened. Oh, and if you’re in the unfortunate position of having to have a toe amputated, then the tavern does take donations. They currently have ten on rotation.

Humans are an ingenious bunch when it comes to making intoxicating drinks. For proof, look no further than the thousand year old recipe for making masato, a favourite with tribespeople in the Peruvian Amazon. It has a rather unique ingredient – human spit – which is mixed with boiled yuca (cassava).

The process sees masato brewers, normally women, chew vast quantities of the boiled plant for up to 30 minutes, before spitting it into a bucket. The enzymes in the spit break down the starch in the gooey mass and turn it into sugar. It then ferments for up to 10 days and is often served at a feast. Oh, and it’s a huge social faux pas to refuse a bowl, no matter what your weedy Western sensibilities might be telling you. So drink up.

This unremarkable rice wine looks like the sort of thing you might pick up at duty free as a last-minute gift. Indeed, it’s available at most Chinese supermarkets. However, the important character on the bottle to pay attention to is this one – 鞭 – which means ‘penis’ in Cantonese. Because this bad boy is brewed using the penis from a seal, a deer and a dog to produce a spirit that’s said to impart potency and vitality to the drinker. Aficionados claim that the drink – which tastes like vinegar mixed with prune juice – has three distinct flavour profiles. In other words, those with a refined palate can taste each animal distinctly. Frankly, we’re happy to remain in blissful ignorance on this one.

James Gilpin takes the piss. No, stay with us here. He genuinely uses urine – his own particularly sugary urine (he has type two diabetes) – and uses it to make whisky. He’s also reached out to other diabetics and put their watery waste to good use.

It was conceived as both an art project and educational tool and resulted in several blends that members of the public could try. James starts by separating the sugar molecules in a purification process before activating a whisky mash in place of traditional malted starch. Each bottle is then marked with a label stating the city where the core samples originated.

So if a global whisky drought ever materialises, it’s good to know that there are options.

Let’s face it, a first date is usually a nerve-wrecking experience, so we give you our top five unusual places where the awkward silence will be minimal, and you can subliminally test your potential partner’s sense of humour and personality without resorting to the ‘what star sign are you?’ type of clichéd questioning.