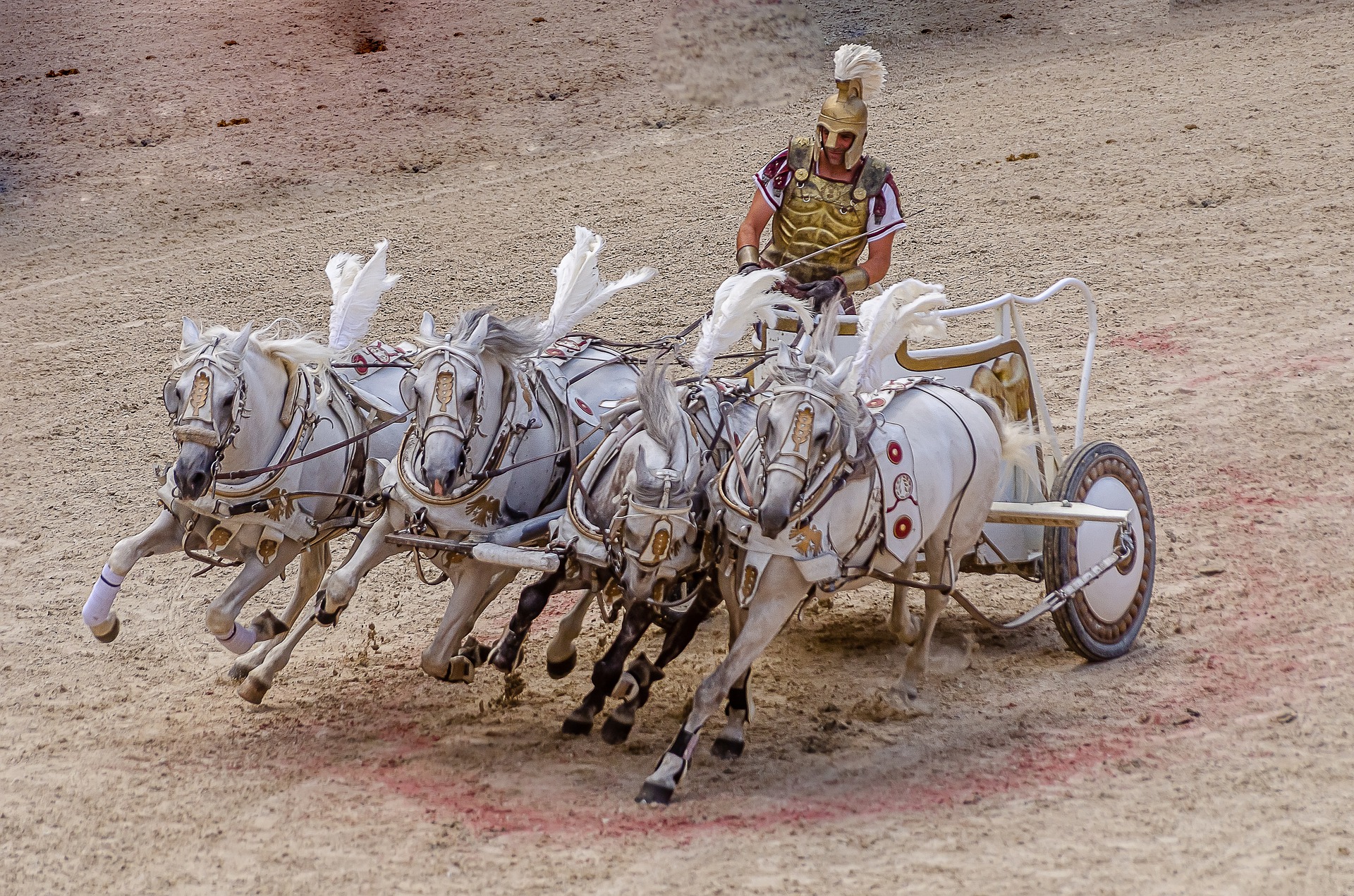 From sacrificing ballplayers in Mesoamerica to filling coliseums with all manner of exotic animals (and gallons of water for mock naval battles), the Ancient World hosted some very epic games.

The definition of the word “game” is pretty fast-and-loose. It includes any activity engaged in for amusement.

As it happens, back in the day, backgammon didn’t cut it.

Read on for a rundown of the coolest ones.

Though the original name and rules of the game are unknown today, we know that a Mesoamerican ballgame was popular in much of the New World – and that it probably originated sometime between 2500 – 100 BCE where rubber trees are common. The balls varied in size, but could weigh as much as 9 lbs, and were always solid rubber.

It’s thought that the rules varied too, depending on context, but, in general, the goal of the game was to keep the ball in play by bouncing it off players’ hips (perhaps lending new meaning to Shakira’s famous track about keeping your hips honest).

It’s not for the faint of hips – or heart for that matter. In fact, scholars believe this ritualistic game sometimes included human sacrifice. But, even when players were spared the scythe, the game was brutal. Spanish chronicler Diego Durán reported that the players hips were perpetually bruised – sometimes so severely that the contusions had to be lanced open.

A version of the game called ulama is still played by native populations in central and South America today.

Photo by Wayne Taylor on https://www.naroomanewsonline.com.au/story/1386684/marngrook-match-in-bright/

To Western ears, the name Marn Grook – sometimes spelled marngrook – may sound like something you involuntarily shout aloud during the peak of passion.

But Marn Grook actually derives from the Woiwurung language, a tongue common to Australian aborigines, and basically means – wait for it – ‘ball game.’

To play it, you’d punt, kick and catch a stuffed ball. There were an indefinite number of players, but always a lot – and the game was always played over a large, rambling area.

Beyond that, however, there were no real rules and no definite scoring protocol. Often, the winner was decided amicably if one team decided the other had played better. We’re guessing that Premier League-style dissent was definitely not the done thing.

No one is exactly sure how long the game was played (the first Western account is from 1841), but some historians argue that Marn Grook influenced Australian rules football, though such claims are sketchy.

It was a pure game in the sense that the end was always fun – and that’s it.

Of all the games in the Ancient World, the gladiator games were arguably the most spectacular – and the most barbarous.

‘Gladiators’ – which is Latin for ‘swordsmen’ – fought other gladiators, wild animals and condemned criminals for public amusement.

The Ancient Romans took these games seriously, sparing no expense for the so-called ‘bread and circus.’ Some of these events went so far as to fill coliseums with water from the Tiber to recreate famous naval battles – for a game called Naumachia – which included ships and, of course, many accordantly watery deaths.

Other popular events included imported animals – including lions, leopards and bears – and featured voluntary hunters called venatio, who would hunt the animals in the public arena for sport. (Between 108 and 109 AD, Emperor Trajan celebrated victory over the Dacians with the sacrifice of 11,000 animals over 123 days.)

Gladiators, on the other hand, were – like the Barbary lions – rarely volunteers. Most were slaves, endured brutal training, considered exceptionally low on the social totem pole and kept separate from polite society even in burial.

Despite the boozy hordes chanting (insisting, really) that football should be ‘coming home’ to England, the game actually originates in China.

The rules of Cuju – sometimes called Tsu Chu – are pretty simple. One: you can’t touch the ball with your hands. Two: you kick the ball through the net.

Invented during the Han dynasty, FIFA gives props to Cuju for being the earliest known form of football – first noted as a way for Chinese soldiers to get exercise from 3rd–2nd century BC.

Baggataway is the earliest form of a contemporary game, lacrosse. It was originally meant to train warriors for battle, or to settle intertribal disputes. Very often violent, many participants were either maimed or killed during a baggataway match.

The scale of this game is difficult to understate: thousands of individuals could play a single game, which could last for several days and cover fields several miles in size.

Much like in modern lacrosse, baggataway players caught and threw a small ‘stone’ – made of stone, bone, hair, wood, or stuffed deer hide – with sticks made of wood or deerskin. The aim was to get the stone into a series of triangular nets.

Before the game, every player had to make a wager – any valuable trinket would do. And to the winners went all these spoils.

Vikings aren’t remembered as being softies. On the contrary, in addition to all the drinking and pillaging and longboating, they’d even abandon their own children if they were sick – either by chucking them overboard or leaving them to the elements.

That being said, when it came to recreation, the Vikings’ tastes were relatively tame. They liked skiing, for one (though they didn’t invent it, as some mistakenly claim).

When chilling out, the Vikings also enjoyed an ancient board game called tafl, but also known as hnefatafl – a name that is impossible to say without sounding like a sneeze.

Though dubbed ‘Viking chess,’ tafl is actually a set of different strategy games that bear little resemblance to anything we’d play today – such as chess, which supplanted tafl in the 12th century. The game pits a king and 12 defenders in the centre of the board against 24 attackers arranged around its edges. Many of the most renowned Viking warriors were buried with a tafl set in their grave, marking them out as a supreme military strategist.

If all this talk of crazy games has got you in the mood for some crazy golf, then book a round at Swingers – either in London’s West End or City locations. From brilliant food to top tunes and a buzzing atmosphere, it’s one of the best nights out in town.